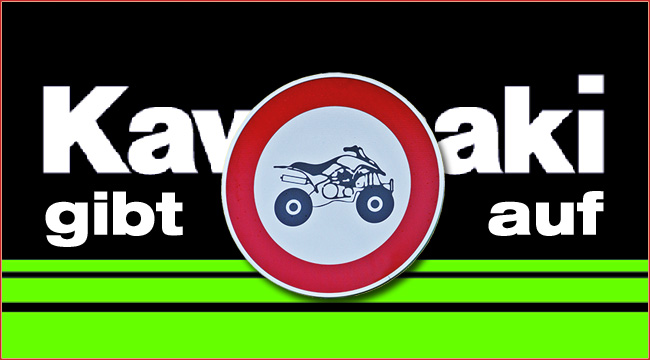 
Bang effect before the Intermot: Kawasaki gives up. At least his German import of ATVs and side-by-sides, which Kawasaki calls ‘Mule’. A secret dealer circular states:

The new European homologation guidelines of the WVTA (Whole Vehicle Type Approval) will massively reduce our scope for selling the ATV and MULE in Germany in the next few years.
The legally severely restricted post-homologation by third-party providers is particularly noteworthy here.
Due to constantly falling sales figures, the decision was made at our parent company not to carry out any separate development for the European market. The model range, which is geared towards the world market, does not allow for any meaningful marketing in Germany beyond 2017.
Therefore, after long and intensive consultations, we had to decide with a heavy heart not to import any further ATV and MULE models with immediate effect.
This means that we can only offer you the stock that is currently available to us.
The current framework conditions remain valid until December 31, 2016 and end automatically on this date.
The supply of spare parts remains unaffected by this. Here we offer you the usual service. Of course, our customer service department will continue to support you in this regard.

The reports of the group superiors raise questions. First and foremost: If the bad provisions (of which nobody really knows how they are actually handled) will only take effect after 2017, why are the imports stopped at the end of 2016?
A look back: When the ATV and quad scene started in Germany in the early 2000s, it was Kawasaki and Yamaha that made the crawling stuff socially acceptable here. Back then, the question was always: which of the two ‘Japanese’ is currently the market leader. In 2005, for example, it was Yamaha with 1,895 newly registered LoFs, followed by Kawasaki with 1,205 Suzuki with 794, Honda with 485, Bombardier (today: Can-Am) with 169 and Polaris with 151 units. A total of 4,699 LoFs and 19,754 VKPs (with a maximum of 21 hp) were newly registered in Germany in the year.
Today the market looks completely different: With 11,551 LoFs compared to 6,069 VKPs, the market in 2015 was clearly on the side of high-performance vehicles that hit the road with open power. With 890 units, Yamaha is still strong but has been overtaken by CF Moto (1,598), TGB (1,394) Can-Am (1,293), Kymco (1,057) and Polaris (1,032). Kawasaki was there last year with just 133 newly registered LoFs.

In short: the manufacturer, who once did pioneering work in the ATV and quad sector, has increasingly let others take the butter off their bread over the years. How a corporation that produces super express trains, tunnel boring machines and the world’s fastest motorcycles was shown off by far smaller companies who were simply able to listen to customers and build them the products they wanted. Not only in Europe, by the way, but also in the USA, where Kawasaki ATVs and side-by-sides have long been chasing the stronger competition. And last but not least, Yamaha shows that a Japanese company can still get involved in this market – if it only wants to.
At Kawasaki the will doesn’t seem to be there. Given the potential of this group, this is not regrettable. But shameful.

One hope remains: that small, medium-sized importers will take over the import of Kawasaki’s ATV and side-by-side models. Because the brand and the products are good and have good chances on our market. And with a bit of goodwill, there can also be solutions for the approval regulations. imo

Flashing headlights is prohibited on the Autobahn